Identifying Pests by Their Tracks

When pest animals move into your home or onto your property, it’s likely that you’ll see (or hear) signs of their presence long before you actually encounter the animals themselves.  Some critters are easy to identify; there’s nothing quite like the odor of a skunk wafting up from under your porch!  If all you hear is generic scratching and non-descript chewing noises, though, then you might have to search a little harder to figure out what’s going on.  One simple way to ID your intruder is by looking at their tracks.  While an occasional footprint or trail in your yard is usually no big deal, a constant stream of tracks may indicate a full-scale invasion.

Here’s a quick guide to three different kinds of animal tracks commonly found in suburban areas.  For the sake of simplicity and clarity, we’re going to refer to marks made by an animal’s forefeet as “handprints” and marks made by their back feet as “footprints.”  Quadrupeds don’t really have hands and feet the way that humans do, but using those terms makes it a bit easier to describe what we’re looking for. 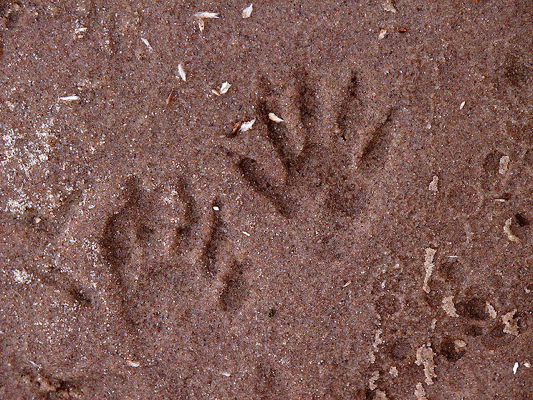 If you find what looks like a tiny human handprint with long, sharp fingernails, then chances are, there’s a raccoon nearby.  Raccoon handprints have five “fingers” and slightly pentagonal-shaped “palms.”  They do not resemble the triangular palms that are usually seen in dog and cat tracks; again, they’re more similar to human hands than “paws.”

Raccoon footprints, meanwhile, look like an elongated version of their handprints. The “sole” of the foot is pulled into the shape of an inverted triangle. 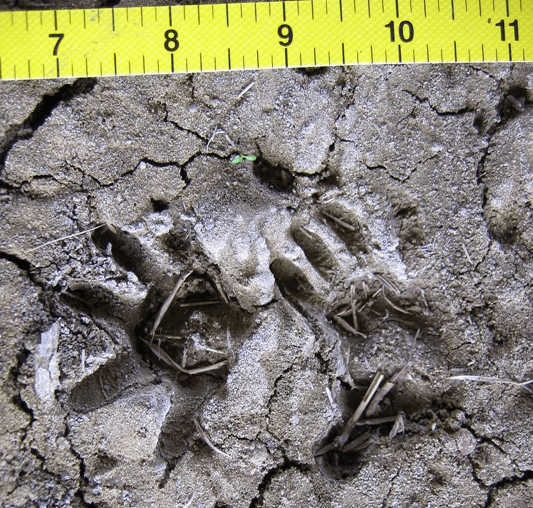 Opossum handprints are more paw-like than raccoon prints; their palms are closer to the triangular shape exhibited by dogs and cats. Unlike dog and cat paws, though, an opossum’s “finger” pads are visibly connected to their palms—there’s a definite line joining their fingers and palms instead of them appearing to be different structures.

Curiously enough, opossum footprints bear a very striking resemblance to human handprints, with four distinct “fingers” (which are really their smaller toes) and an opposable “thumb” (which is really their biggest toe).

One more thing: when you’re looking at opossum tracks, you may also notice a long, vertical line that seems to run in the same direction that the animal was traveling.  This is actually an indentation from the opossum’s tail dragging on the ground! 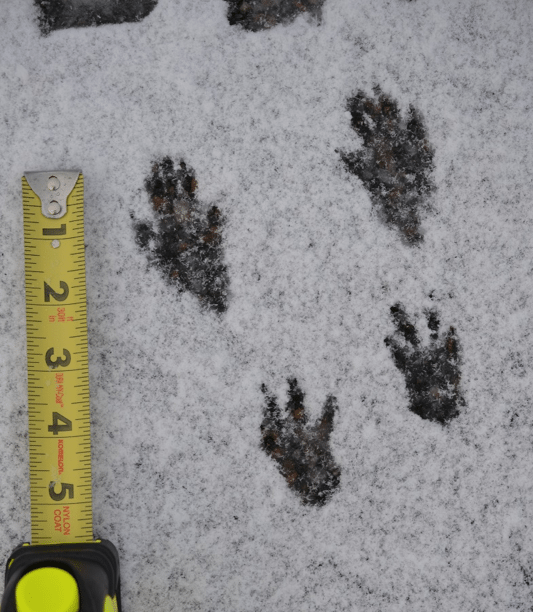 Squirrel tracks are usually much smaller than raccoon or opossum tracks, but one thing that definitely sets their handprints apart is the presence of only four “fingers”—raccoons and opossums both have five fingers on each hand.

Squirrel footprints look similar to raccoon footprints, but they tend to be slightly more rectangular in the sole area.  Their toes are also longer and thinner, and may even look a bit more like human hands in their shape and toe distribution.

Note: in the photo to the right, the squirrel’s handprints are actually behind its footprints.  Rest assured that the owner of these tracks was not running backwards or suffering from some kind of deformity; that’s simply how a squirrel’s feet and hands tend to land when they’re moving quickly.  According to the photographer, this picture was snapped just after the squirrel was spotted bounding across a park road!

It’s not uncommon for people who find animal tracks on their property to want to learn more about them.  Doing so can be a fun and interesting way to appreciate local wildlife, or it can at least answer the question of, “What is it going to take to get rid of those things?!”  But as you’re embarking on your backyard biology expedition, try to keep a couple things in mind:

And one last piece of advice: keep your distance.  This one’s especially important for children, who may be tempted to follow animal tracks like a dotted line on a treasure map.  Even if those little paw prints in the snow or mud look cute, always remember that they were made by a wild animal—one who probably wouldn’t react well to being pursued.  There’s absolutely nothing wrong with enjoying the sight of animal tracks or speculating as to where Mr. Raccoon might have run off to.  Following an animal back to its den (especially if you plan to evict it), on the other hand, is a task best left to the professionals!