How to Keep Wildlife out of your Garbage Can

You are walking home one evening, and you haven’t eaten all day. Your belly is growling, you are hungry, and you don’t know whether or not there is anything in your cupboards or fridge at home. But as you walk past a neighbor’s house…you see that they’ve left a huge box of non-perishable snacks out on their front lawn. Even if you knew that taking some of your neighbor’s food would be stealing, wouldn’t you at least be tempted to pocket a granola bar or two? 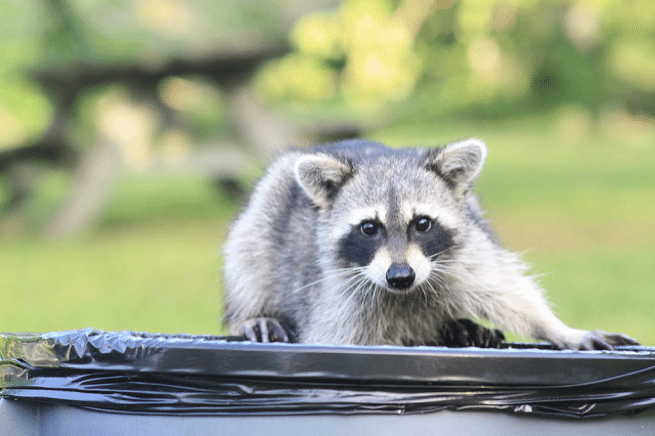 For wild animals, human garbage cans are like the box of snacks in the aforementioned scenario. Usually a source of interesting smells and food remnants, trash cans will easily grab the attention of hungry critters who aren’t sure where their meal is coming from. And unlike humans, most animals have absolutely no qualms about “stealing” their daily bread and making a huge mess in the process! If you’ve ever stepped outside to find your garbage cans knocked over, your trash strewn about, or even an irate animal ready to defend their ill-gotten dinner, here are some tips:

Many folks like to keep their garbage cans far away from their house, and that’s understandable. After all, garbage cans can be smelly, cumbersome, and just feel “gross” to the touch! But simply leaving the cans in your backyard or off to the side of your house is a recipe for disaster. Whenever possible, try to keep the cans in an enclosed area, like a garage or a locked shed. This will put a layer of protection between the cans and any wild animals that might wander onto your property. Raccoons and opossums can be clever and persistent, but they’re often no match for a locked door.

…and if the Cans Need to Be Outside, Take Evasive Action

In most municipalities, trash is collected and carted off to a waste management facility once or twice a week. And for trash to be collected, the cans usually must be left in a designated area (e.g., the curb in front of your home or an alleyway behind the houses on your block) before the garbage truck arrives. This system is certainly convenient for humans, but dozens of people setting their trash cans out at the same time often brings pest animals out of the woodwork. Do your part to prevent garbage day “raids” by not setting the cans out too early, not stuffing them with trash until they’re overflowing, and bringing them back inside as soon as possible. A critter making its way down your street will probably just move on when it sees that your home doesn’t have anything worth inspecting.

Though we do strongly recommend that people keep their trash indoors (see our first tip a few paragraphs back), we also realize that not everyone has the option to do so. For instance, if you live in a small home with a driveway awning instead of a true garage, you may not have an indoor area beyond your house where the cans can “live.” But even if you can’t keep your trash can inside, you can still protect it from outside threats! Garbage cans made of metal will “lock in” food odors, and while not impenetrable, they’re much harder to chew through than plastic or rubber-based cans. Some cans also have locking mechanisms, making it difficult (or impossible) for them to be opened by non-humans, and bungie cords or staked ropes can be used to secure non-locking cans. And finally, never underestimate the power of motion-activated security lights—they’re a simple method for scaring off intruders of the two-legged and four-legged variety!

To be clear: we’re not suggesting that you poison the animals raiding your garbage can; that’s an ethical debate for another day. However, lightly spraying your trash cans and trash bags with ammonia (or an ammonia-based cleaner) once a week can do wonders for keeping critters away. Anyone who has ever gotten a whiff of concentrated ammonia while cleaning their floors or taking a chemistry class knows that the stuff is pretty noxious. Think about how bad it must smell to animals, who generally have much more sensitive noses than humans! A few sniffs of ammonia in your trash is usually enough to convince even a very hungry creature to take its business elsewhere.

Know When to Call in an Expert

While an occasional assault on your trash is usually more of an annoyance than anything else, constant attacks should be cause for alarm. And if you have taken several precautions but you are still having problems, then your predicament might be a little more serious than a lone raccoon or opossum gallivanting through the neighborhood on garbage day. For example, if you keep your trash can inside but it’s still getting ransacked on a regular basis, you could have a raccoon living inside the walls or crawlspace of your home. And a durable trash can getting breached may be the handiwork of an entire colony of rats or squirrels that have taken up residence in your attic. If you have any reason to believe that the threat is coming from inside your home, then it wouldn’t hurt to call in a licensed wildlife removal specialist. A trained technician will be able to examine your home for signs of entry or infestation and provide you with a plan of action.

Obtaining food by any means necessary is a natural part of a wild animal’s life. However, when an animal’s attempts to feed itself involve making messes or creating unsanitary living conditions, most humans lose their patience very quickly. If you’re having problems with animals getting into your garbage cans, it’s not something to ignore. Take steps to combat your furry “diners,” whether that means moving your trash, replacing your cans, or having the unwanted animals evicted outright!

essays about my family.