Is that a Bee, a Wasp or a Yellow Jacket?

When humans see some kind of stinging insect in their home or on their property, their first instinct might be to grab a weapon (like a can of bug spray or a rolled-up magazine) and charge into battle.  And while that’s not a completely unreasonable response—especially if you have small children, pets, or people with allergies in the house—it’s not always necessary.  The sad truth is that, in our war against aggressive pests like wasps and yellow jackets, innocent and eco-friendly bees get caught in the crossfire far too often.

Let’s put a stop to this unnecessary violence!  Though our blog usually focuses on larger animals, today’s topic is going to operate on a much smaller scale.  Here are some tips for telling the difference between honeybees, wasps and yellow jackets.

Body Shape/Appearance
“Pleasantly plump,” with three distinct segments; head, thorax, abdomen.  The head, thorax and legs tend to be fuzzy, which is one of their more well-known characteristics.

Body Color
Stripes of black and deep yellow, or golden brown.  If you catch one in the middle of gathering nectar, it might also be covered in a layer of bright yellow pollen! 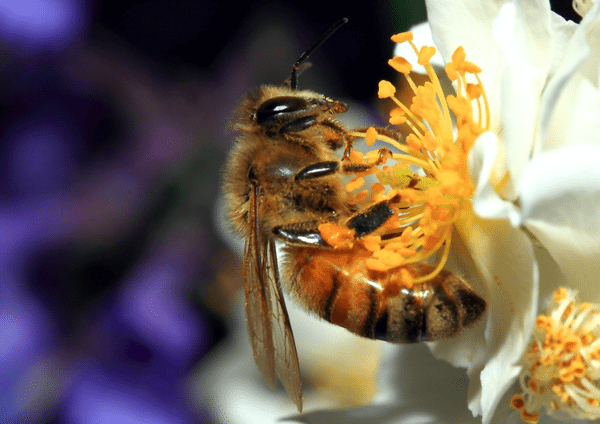 Aggression Level
Generally docile.  Bees usually only sting if they’re being harassed or think that their hive is under attack.

Can they sting multiple times?
No.  Due to the way their stingers are shaped and attached to their body, a bee that stings a mammal (as opposed to another insect) will leave their stinger—and a chunk of their abdomen—behind when they fly away. As a result, the bee will die within a few minutes of stinging someone.

Conclusion
Bees are good for the environment and, by extension, beneficial to humans.  They’re also generally non-aggressive, which means that you’re unlikely to have a problem unless you strike first.

The only exceptions to this would be if (1) you or a family member is allergic to bee stings, or (2) you have young children or pets who may inadvertently bother the bees and wind up in trouble with them.  In either case, please contact a specialist to find and relocate the hive—do not destroy it.

Body Shape/Appearance:
Slender (almost skinny) with three distinct segments, all of which appear to be bald at normal magnification.

Body Color
Varies.  Some are brown with yellow markings, while others are a deep, reddish-brown color all around.  Their wings tend to be brown or smoky gray. 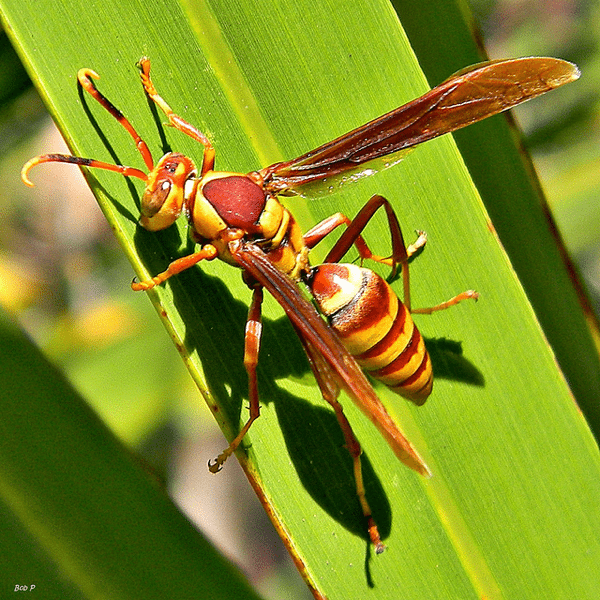 Aggression Level
Somewhat aggressive.  While they typically only attack when they feel threatened or perceive a risk to their nest, they have been known to sting unprovoked.

Can they sting multiple times?
Yes.  Wasps are notorious for their ability to strike again and again.  Wasp stings are actually sometimes accompanied by scrapes or scratches; this is from them dragging their stinger out of the (moving) victim’s skin in order to attack once more.

Conclusion
Wasps do play a valuable role in the environment; they pollinate plants (though not to the extent that honeybees do) and help control the insect population.  So, unfortunately, we can’t just eradicate the little jerks entirely.  If you find a paper wasp hanging around outdoors, it might be best to just it leave be.

That said, wasp nests located near human structures (e.g. houses, storage sheds, playgrounds) should be destroyed as soon as possible, whether that means using a commercial insecticide spray or calling in a professional.  And if a lone wasp gets inside, don’t bother trying to coax it back outdoors—just kill it.

Body Shape/Appearance
Yellow jackets are technically a variety of wasp, but their coloration often throws people off, which is why we’re discussing them separately.  Either way, they have the same distinct, three-segmented bodies that appear bald at normal magnification.  Their heads are typically wider than what you would see on a paper wasp, though.

Body Color
Stripes of black and bright yellow.  Like many creatures with very bright coloration and conspicuous markings, this combination serves to warn other animals (and humans!) that they should keep their distance. 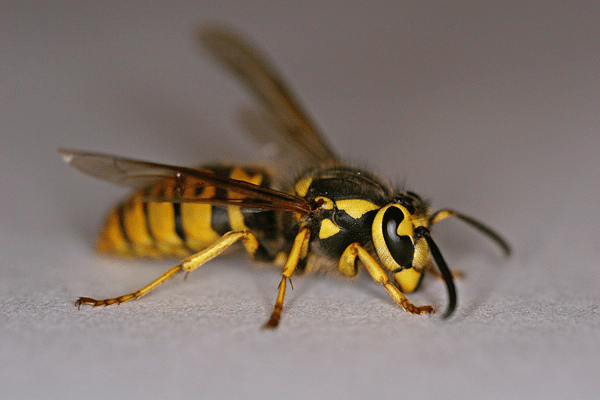 Aggression Level
Aggressive, even more so than other wasps.  They are known to attack unprovoked, especially if another creature makes the mistake of wandering too close to their nest.

Can they sting multiple times?
Yes.  Like paper wasps, yellow jackets have straight, non-barbed stingers, which means that they’re fully capable of stinging, pulling out and then stinging again.  Yellow jackets also have well-developed mandibles and are capable of biting their victims.

Conclusion
Once again, yellow jackets play a vital role in the ecosystem by eating other pest insects, so we can’t just eliminate them completely.  They also tend to fight back rather viciously when they think someone is challenging them (i.e., by approaching their nest or swatting at them), so it’s best to just back away slowly when you see one outside.

But just as with other wasps, if you notice a yellow jacket nest on your property, it should be destroyed.  If one gets inside the house, wipe it out by any means necessary.  And do try to kill it in one hit, since an angry yellow jacket is liable to launch a counter-attack!

It’s a bit tricky to tell the difference between a paper wasp and a yellow jacket while one is zipping around your head or home.  The good news, though, is that you don’t need to be an expert on these creatures; the much more important question to ask is, “Is that a bee or something else?”  And more often than not, you can answer that question by trying to see if the creature is hairy.  A fuzzy body or thorax is usually a tell-tale sign of a bee, while “baldies” tend to be some kind of wasp or hornet.

It’s fairly normal to feel uncomfortable around stinging insects, especially when they decide to set up shop on our property.  After all, they are capable of harming us, and when dealing with any kind of animal, that’s usually grounds for a speedy eviction.  But focus your ire on the truly dangerous ones, like wasps and yellow jackets…and give bees a chance!