Firecrackers and Outdoor Safety for the 4th of July

July fourth will soon be upon us, and for many Americans, the only “true” way to celebrate Independence Day is with firecrackers. These small, specially designed explosives are definitely fun and exciting to wield, but they’re also loud and potentially hazardous to both humans and animals alike. Their misuse can very easily lead to injuries and extensive property damage, so setting them off is not something that you should attempt on a whim.

If you’re planning to host a party (or even a small, family-oriented get-together) and would like for firecrackers to be involved, here are some guidelines to keep in mind:

Depending upon the city in which you live, possessing and/or setting off firecrackers—particularly in suburban areas—may actually be illegal. Before you load up on Roman candles and make a plan to blow them all up in an elaborate manner, actually check to make sure that doing so doesn’t constitute a crime. Know that some cities do allow for civilian possession of firecrackers, but the explosives may only be set off by someone with a special license (and training). Again, do your research! Firecrackers may make your house the talk of the subdivision, but if one of your neighbors decides to “bust you” and call the police, you could be slapped with a $2,000 fine! 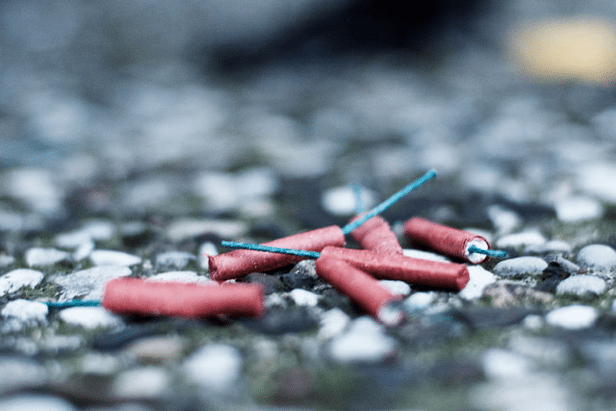 Keep Fireworks Away from Children, Teenagers, and Impaired Adults…

Most (if not all) fireworks sold by reputable manufactures are stamped with a warning label reminding consumers that they are, in fact, dangerous explosives. And like all other dangerous and/or potentially explosive substances, they should be handled with extreme caution! If there will be young children afoot when you set off your fireworks, please keep a very close eye on them—firecracker-related injuries can maim a child permanently (lost limbs, severe eye injuries) or even be fatal. It’s probably not a good idea to allow teenagers to handle fireworks, either, as teens aren’t exactly famous for having impeccable judgement or a deep grasp of their own mortality. Finally, if you notice that one of your friends has had one or two beers too many, then please steer them away from combustible items, as well!

…and be Wary of Sparklers.

Would you allow your child to run around with a lit match in their hand? What about a burning candle? If your answer to either of those questions is “No,” then think long and hard about whether or not your child should be allowed to play with sparklers. Sparklers may be pretty, but they burn at temperatures between 1800°F and 3000°F. That’s plenty hot enough to cause severe skin burns! They’ve also been known to ignite clothing and start grass fires, especially when they’re handled improperly. Your decision to let your child play with a sparkler should be based upon their level of maturity and understanding of how potentially unsafe these items really are. If your child can’t quite grasp that concept, then skip the sparklers and opt for colored glow sticks instead.

It should go without saying that shooting off firecrackers indoors is a bad idea. However, just moving the festivities outside isn’t enough to totally negate your risk of fire, property damage, or bodily injury. Really think about the direction in which the firecracker will go once you light its fuse, and steer it away from buildings, cars, animals, and people. Those last two are critically important; you should never aim a firecracker at another living creature, even as a joke! Also, instead of picking a random spot for each and every explosion, set aside a designated “blast zone.” This will (1) help keep bystanders out of the line of fire, (2) enable you to keep a spark-quenching bucket of water nearby at all times, and (3) discourage raucous party guests from getting a little too close to your house with their spinners and fountains!

Few people genuinely enjoy tidying up after a major project or party, but it’s something that just has to be done. And if firecrackers were involved in the festivities, then you definitely cannot skip this step! Watch out for extinguished sparklers lying on the ground; it’s not unheard of for folks to accidentally step on these and slice their foot on the sparkler’s metal “wick.” And firecracker residue, paper wrappers, and plastic casings are both ugly to behold and potentially dangerous if they’re consumed by small children or animals.

So, about 15 minutes after the last explosion has occurred, start gathering up litter. Soak all firecracker garbage in water for about 10 minutes (to make absolutely certain that any lingering sparks have been snuffed out), pack the mess up in a plastic bag, and put it in a waste receptacle. Remember: anyone who’s mature enough to play with firecrackers is mature enough to clean up their own messes, so don’t let your guests leave without first discarding their trash!

With all of these safety precautions to be mindful of, you may decide that obtaining and setting off your own firecrackers just isn’t worth the hassle. Or, you may decide that it is worth the hassle and you’re ready to meet any potential challenges head-on. The choice is yours, and you should make it based upon your level of comfort and the amount of responsibility you’re willing to assume.

Happy Fourth of July, everyone! Let’s all try to have a safe, happy holiday this year!

Tony, owner and operator of Chimney and Wildlife Specialists, has a big heart for rescuing wildlife and returning animals back to their natural habitat. When Tony is not climbing up a roof, he loves spending time with his beautiful family and their two dogs.
parts of the essay.