Why Do Bats Sleep Upside-Down? Questions and Answers about Unique Wildlife Behavior

As much as humans enjoy watching wildlife, we often find ourselves completely baffled by the things that animals do. Activities and habits that are “business as usual” for certain critters can seem bizarre or nonsensical to us—even irritating, depending upon the situation. Interestingly enough, though, many of these actions really do have completely rational explanations. For example:

“Why do bats sleep upside-down?”

Have you ever seen a bird take flight from off the ground? One second, the bird is relaxing or walking around in the grass, and the next second, it flaps its wings and becomes airborne. This is something that birds can do quite easily; it’s such a common behavior that most of us aren’t even startled when we approach a bird and it suddenly launches itself into the air. Now, have you ever seen a bat take flight from off the ground? Chances are, you haven’t, because bats actually aren’t capable of doing this—their wings just can’t produce enough “lift” for them to propel themselves upward when they’re at ground level. 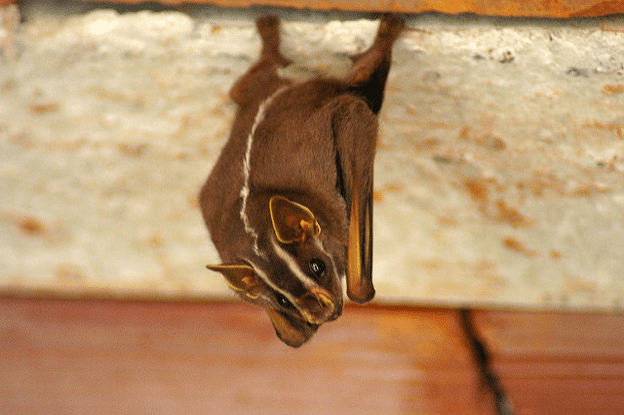 Bats sleep upside-down primarily as a survival adaptation, and this behavior has more to do with them suspending themselves in the air than it does them inverting their bodies. If a bat is awakened suddenly by a predator or some other danger, then the bat’s first instinct will be to let go of the surface its feet are clinging to and allow itself to drop straight down. At this point, the bat can spread its wings and catch air, thus enabling it to fly away from the potential threat.

Being upside-down for an extended period of time is extremely uncomfortable for humans, but bat biology enables these critters to do so with no problem. Their feet automatically assume a “gripping” position when they relax, and their bodies are so small that gravity doesn’t really affect their blood flow. Perching heels-over-head really is the most comfortable and safe way for them to rest.

“Why do deer jump out in front of cars and then suddenly freeze?”

Country (and even some suburban and urban) roads are often dotted with “Deer Crossing” signs; these are posted in an effort to warn motorists that a deer might dash out in front of their car and cause an accident. While many folks feel sad or guilty when they accidentally hit a wild animal with their car, deer are large enough that crashing into one can cause serious damage to your car and anyone inside the vehicle. It’s frustrating, then, that deer seem to have a bad habit of walking out onto roads and then stopping when they see a car approaching—especially at night.

Well, picture this: you’re walking around outside, when suddenly, there’s a flash of light that’s so bright, you can’t see anything. Your entire field of vision is pure white. Would you continue running in the direction that you were originally headed, now completely blind, or would you stop for a second to try to gather your bearings?

Deer have very large eyes, and their pupils are capable of dilating immensely when there’s very little ambient light around. This means that deer have excellent night vision; even tiny amounts of light (e.g., from the moon and stars) enable them to navigate through dark forests and thickets with ease. But if a deer’s pupils are dilated and the animal is suddenly faced with very bright, artificial light (like the kind from car headlights), then it will be temporarily blinded and feel disoriented until its eyes can adjust. When a deer stops in front of your car, it’s because the deer can’t see anything and doesn’t know what’s going on. In their mind, freezing is the safest course of action. They have no way of knowing that this is actually the worst thing that they can do when a car is careening towards them. Please drive carefully, folks! Deer don’t know much about road safety, so it falls on humans to know deer safety.

“Why do opossums ‘play dead’ when they feel threatened?”

The short answer to this question is, “Because, most of the time, their act is pretty darn convincing.” If you’ve never seen an opossum pull this stunt, then it’s important to understand that “playin’ ‘possum” doesn’t just mean that the animal flops over onto its back, closes its eyes, and holds still for a minute or two. When an opossum does this, it essentially falls into a comatose state that can last between 40 minutes and four hours. And in addition to closing its eyes and lying still, the comatose opossum will also balls up its hands and feet, drool, and emit a foul, decay-like stench from its anal glands. Between the little faker’s appearance and its odor, most predators will assume that the opossum is a long-dead, rotting corpse and therefore no good to eat.

Playing dead is an involuntary response on the part of the opossum. It’s basically the animal equivalent of fainting; if they get too stressed out or nervous, then they just do it automatically. And it’s not uncommon for humans to fall for this trick. So, if you ever encounter an opossum that appears to have “expired,” maybe wait a few hours before you try to dispose of the body yourself. If you jump the gun, you may accidentally subject that poor critter to a premature burial!

Wild animals don’t always behave the way that people expect them to, which is why they can be dangerous when they decide to move into human homes. There’s nothing wrong with enjoying animals from a distance; in fact, it’s often fascinating to learn new information about the critters that you see every day. But if you find a wild animal in your home or on your property, the only thing that you need to “learn” is the contact information for a local wildlife removal service.