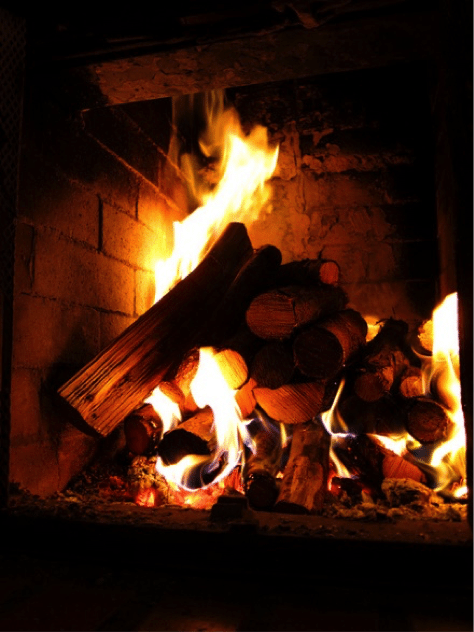 The mental image of a cheerful, roaring fire in a house’s hearth can inspire a variety of feelings in different people, and most of them are positive: warmth, security, comfort, romance…the list goes on and on. What we don’t often think about, though, is whether the fireplace is our fantasy is the kind that burns wood or the type that utilizes natural gas.

Asking “Which style of fireplace is better?” will set off a flurry of debate among enthusiasts, but it’s a conversation worth having. Here’s a head-to-head comparison of these fixtures in three separate categories:

If you’re cold and want a fire right now, gas fireplaces can’t be beat. Starting the fire consists of only one step: flip a switch. The moment you do that, a flame will spring up in your fireplace, bringing with it all of the heat and ambiance of a traditional fire. It’s so simple; a child could do it…which, actually, might be a bad thing, if you really do have small children in your house. Little ones might enjoy watching a fire (or even get a kick out of turning it on and off), but they might not truly understand how dangerous an open flame can be. Yes, a gas fireplace is extremely convenient, but everyone in the family must understand that it’s not a toy!

Traditional wood-burning fireplaces, on the other hand, require a lot more time and TLC than their gas-powered counterparts. You have to obtain wood, arrange it properly, add a flame, and “stroke” the fire until it’s big enough to burn on its own. You might also need to occasionally add more fuel to prevent the fire from going out. Many homeowners find the whole process of building and maintaining a wood-burning fire to be satisfying, but it can definitely be tedious and/or frustrating, especially if you’re already cold or tired and the fire is “being stubborn.”

As their name implies, wood-burning fireplaces utilize chopped wood and some kind of kindling to feed their fires. Bundles of firewood are available for purchase at most grocery or super stores, and some convenience or corner stores carry them, too. If you own property with a large number of trees growing on the land, you can even cut the firewood yourself! Kindling can come from commercial sources, but some folks just use stuff lying around their house (such as newspapers, cotton fibers, and even greasy snack chips) to suit their purposes. Fuel for a wood-burning fireplace isn’t very difficult to obtain, but keeping a viable supply on-hand at all times might be tricky.

Gas fireplaces burn natural gas in order to produce a flame; the ceramic “logs” that are integrated as part of their design are mostly just for show. The average homeowner doesn’t have a means of drilling, collecting, and refining natural gas on their own, so you’ll likely need to pay a dedicated provider for it—just as you probably do for your electricity and water. Natural gas is relatively inexpensive, but if you’re interested in being “self-sustaining” (or just think that making your kids gather wood will help them build character), then a gas fireplace might not be the right choice.

There’s a reason that people usually don’t build wood-burning fires in the middle of their living rooms, and it’s not just because they’re worried about damaging the carpet. A fire fed with wood naturally creates smoke, soot, and ash as it burns. Ash is fairly easy to sweep up after the fire has been put out, and smoke should go up (and out) the chimney if the fireplace is ventilated properly. Soot, however, is a different beast; it likes to “climb” the walls of chimneys and accumulate in spots that are difficult to reach without special tools. When the soot mixes with the moisture in the air, it turns into creosote, which is a sticky, tar-like, extremely flammable substance. A creosote buildup in your chimney can cause a fire, and a chimney fire is more than capable of spreading to the rest of your home. If you own a wood-burning fireplace, you should plan to have it serviced by a professional chimney sweep at least once a year. The sweep will be able to clean the fireplace of ash and soot, as well as remove any creosote that may be lurking within the chimney. They’ll also verify that the chimney does not show any signs of damage, the cap (if you have one) is in good condition, and all of the chimney’s internal mechanisms are functioning properly.

Gas fireplaces come with their own set of issues. Ceramic logs can deteriorate over time, and the tiny bits of debris that result from this may clog the vents. Damaged chimneys can allow moisture and debris to enter the hearth. And while a fire from creosote buildup isn’t something you’ll need to worry about, leaks in the fireplace’s valves and connectors can allow gas to escape, which may cause a dangerous (perhaps even deadly) explosion. Once again, having the fireplace and chimney inspected annually by a licensed chimney sweep is essential—doing so will allow you to catch problems before they become serious!

So, which style of fireplace reigns supreme? Hard to say. Both have benefits and drawbacks, so the decision of which one you should have in your house is really a matter of personal taste. Gas fireplaces are more convenient and yield results much faster, but some people feel that “building” a fire is half the fun of having one. Fuel for a wood-burning fireplace is easier to obtain on your own than natural gas, but not everyone has the patience (or space) to gather wood in advance or keep a sufficient supply in their home. And both kinds of fireplaces require regular maintenance, lest they become a safety hazard. If you’re still stumped about which fireplace is a better match for your lifestyle, consider taking your questions to an expert on the subject. Whether you decide to go with classic wood or cutting-edge gas, the one you pick will warm you heart…and your home.