Hatchlings, Nestlings, and Fledglings: How to Tell if that Baby Bird Needs your Help.

Picture this: you’re taking a walk through your neighborhood, your backyard, or a local nature trail, and you find a baby songbird lying on the ground. The bird doesn’t look sick or injured, it’s just…on the ground. It doesn’t fly away when you approach it, and you get a distinct impression that it can’t fly. Maybe it’s making a lot of noise, or maybe it’s standing perfectly still and trying to hide.

You want to help it, but what should you do? 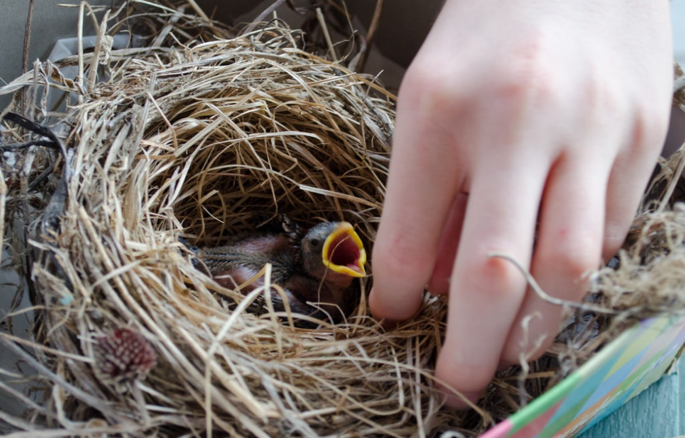 During the spring and summer months, when people tend to spend a lot of time outdoors and come into contact with wild animals, it’s not uncommon to find baby birds that, for one reason or another, are not in their nest. And far too often, well-meaning humans react incorrectly to the situation; they either “adopt” a bird that doesn’t need to be adopted and hand-reared, or they “rescue” a baby bird that was actually just fine where it was.

So, what should you do if you find an uninjured baby songbird on the ground? The answer depends upon the bird’s age and stage of development:

As their name implies, hatchlings are baby birds who have only very recently hatched out of their eggs. For many songbirds, this means that they’re, at most, only a few days old. Baby birds at this stage of life are completely dependent on their parent(s) for food and care. They also like to huddle with their siblings for warmth.

Hatchlings are generally naked, with only a few wispy or downy feathers on their bare skin. Their eyes are closed, as well, and the bird’s beak may seem abnormally large for its head. Beauty is in the eye of the beholder, but let’s be honest: hatchlings are usually pretty alien-looking and not incredibly cute!

Finding a hatchling on the ground or out of its nest is cause for concern, as chicks that age can’t do much of anything—they’re like human infants. In this situation, the best thing to do is to look around and see if you can spot the nest nearby. If you can find it, gently pick up the baby bird, place it back into the nest with its siblings, and walk away (lest you attract predators to the nest or give an overly-protective mama bird the wrong idea).

If you can’t find the nest or the nest has been destroyed, you can try putting the hatchling in a loosely woven wicker basket (or plastic hanging basket with drainage holes) that you’ve lined with dry grass and leaves, and hang it from a nearby tree branch at least six feet off the ground. The baby bird’s cries should alert its parent(s) to its new location.

Nestlings are older baby birds who still aren’t quite ready to leave the nest. They’re a teeny bit more capable of taking care of themselves than hatchlings, but they’re still very dependent on parental care if they’re going to survive. Nestlings are usually between three and thirteen days old.

Birds who have reached the nestling phase of development often have open eyes and more of their actual feathers instead of just fluffy down. The feathers, however, may appear to be covered in some kind of capsule or coating; this simply means that their feathers are newly sprouted and haven’t been properly groomed and “fluffed” just yet. Again, at this age, the chicks may be a bit strange-looking compared to older birds!

As with hatchlings, if you find a seemingly healthy nestling on the ground, the best thing that you can do for it is to put it back in the nest with its siblings. If that’s not an option, create a make-shift nest for it and hope for the best.

At this stage of life, baby birds may finally be ready to leave the nest and strike out on their own. And that’s a good thing, because after two weeks of “sharing a room” with their siblings, the nursery may be getting way too crowded for comfort!

Fledglings typically have most of their adult feathers, although those might not be fully developed; their tails and wings sometimes look a bit “stubby” and their plumage can be dull in color. Fledglings may not be able to fly just yet, but they can hop, flutter, and walk with little problem. They’ll often leave the nest to practice flying and foraging for food, but they typically stay close to the nest and their families for at least a few days. Parents of fledglings will usually continue to keep an eye on their babies and will intervene if they think something is threatening a chick’s safety.

This is the point where our advice changes: if you find a fledgling bird on the ground, leave it alone! Unless the fledgling is in some kind of immediate danger from human activity or a predator, then it’ll almost certainly be fine where it is. Being on the ground is totally normal for fledglings; it’s how they learn to take care of themselves and interact with the world around them. If you try to put a fledgling back in its nest, then chances are, the (now annoyed and/or stressed out) bird will probably just hop back out again. And if you decide that you’re going to “rescue” the bird and remove it from its natural environment, you’ll probably do far more harm than good.

There’s nothing inherently wrong with wanting to assist a lost or stuck baby songbird, but it’s important to help in a safe, responsible way. While injured or sick birds may need professional rehabilitation, healthy babies may just need a “boost” back into their nursery…or for you to back off entirely.

The bottom line: humans generally don’t like it when animals force themselves into our lives. So please don’t insert yourself into the life of a baby bird who doesn’t need help!