Chimney Swifts, the Federally Protected Bird that Might Move Into YOUR Chimney

How would you feel if a wildlife removal specialist told you that a pest animal could not be expelled from your home? And not because the animal is vicious enough to hold its ground or crafty enough to evade traps—it simply cannot be moved because doing so constitutes a crime.

Such is the case with chimney swifts, a type of bird that likes to roost and build its nest inside the chimneys of human homes. Most folks learn that they have a chimney swift infestation when they hear the loud, often incessant chattering of swift nestlings coming out of their fireplace. But when homeowners try to make arrangements to have the swifts removed, they learn that the law is actually on the side of their “guests!” 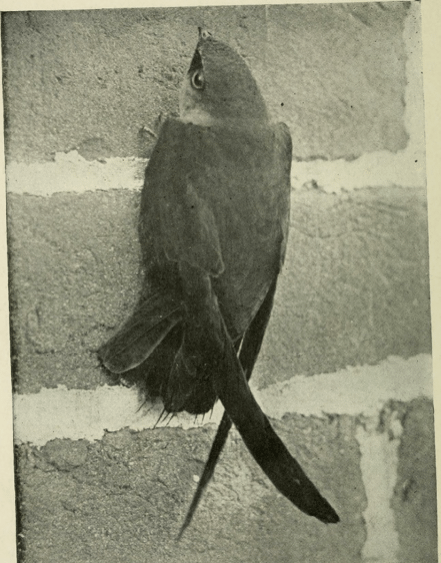 “What are chimney swifts?”

Chimney swifts, scientifically known as chaetura pelagica, are a species of bird native to the western half of the United States and parts of Latin and South America. They’re small creatures, with a general adult size of 4.7 to 6 inches in length and a wingspan of 11 to 12 inches. The plumage of both males and females is a dark gray-brown color with a lighter patch on their throats. Chimney swifts have a distinct silhouette in flight; their large wings and short tails give them a shape reminiscent of an old-fashioned crossbow.

Because of the way their bodies are shaped (that is, proportionately large wings paired with very short legs), swifts can’t perch in the same way that most birds do. When they’re not in flight, they simply cling to vertical surfaces using their hook-shape toes and spiny tail feathers. These birdies are perfectly content to sit absolutely parallel to a brick wall, as if someone glued their bellies to the mortar!

Centuries ago, chimney swifts made their nests inside caves and hollow trees. As time went on, the birds discovered that human structures (especially chimneys) are-well suited for this purpose, as well. And in modern-day America, it’s often much easier for a bird to find a vacant chimney than it is to find a hollow tree.

“Why can’t I move them once they’ve nested?”

According to the Migratory Bird Treaty Act (originally passed in 1918 and last amended in 1998), it is a violation of U.S. law to hunt, capture, injure, remove, or relocate any migratory bird. The law also protects these birds’ eggs and nests. Because chimney swifts are migratory, they—and their nests—are officially protected by the federal government. 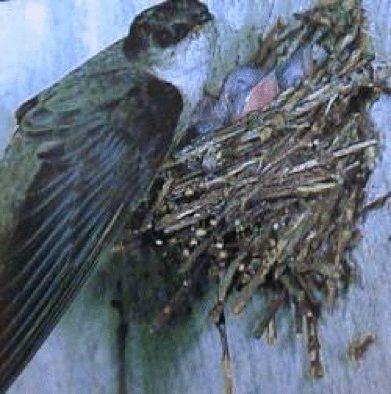 These laws should be taken seriously because the penalties for violating the Migratory Bird Treaty are shockingly steep: folks convicted of interfering with or endangering a protected species can be fined up to $15,000 and/or sentenced to six months in prison. Chimney swifts may be small, but they can cause big problems if you’re caught trying to evict one from your property!

“What should I do if I think that there are chimney swifts in my chimney?”

If you think that any kind of creature is living in your chimney, your first step should always be to call a reputable wildlife removal service and schedule an inspection. A professional will be able to examine the structure and find the source of the chirping or chattering noises, whether it’s chimney swifts, another kind of animal or a different issue entirely.

The bad news is that, if the source of the noise really is a family of chimney swifts, then there’s not much you can do without running the risk of criminal prosecution. Any chimney sweeps or wildlife removal specialists worth their salt will refuse to touch the birds, as well. While federal permits for the removal/relocation of chimney swifts (and other protected species) do exist, they’re only issued on rare occasions. In the vast majority of cases, homeowners are simply told to wait until the birds leave on their own.

The good news is that chimney swift chicks usually don’t start making much noise until they’re around two weeks old, and they leave the nest when they’re around 30 days old. Thus, by the time most people realize that they have swifts in their chimney, they only need to accommodate the birds for a short period of time before being able to reclaim the area. Chimney swifts are also voracious insect-eaters, so as long as the family of birds is living on your property, they’ll happily gobble up any pest insects in the general area!

“How can I prevent chimney swifts from moving in?”

The absolute best way keep these birds away is to have a chimney cap installed. A well-constructed and properly maintained cap will prevent all kinds of birds and wild animals from entering the chimney and building nests. It will also prevent other issues that commonly plague chimneys, like structural damage and debris buildup.

Remember: if you currently have a chimney swift problem, you cannot do anything that would disturb them. You can, however, take preventative measures to ensure that an invasion never happens in the first place…or again.

It’s worth mentioning that a chimney swift infestation is not as severe as, say, an infestation of squirrels, opossums or rats. Chimney swifts usually don’t cause major damage to human homes and property, and they tend to leave on their own instead of needing to be removed by force. That said, having a live animal in your chimney is never a “good” thing—if nothing else, it interferes with your ability to use your fireplace freely and safely. As the old saying goes, “An ounce of prevention is worth a pound of cure.” So please, have a chimney cap installed (or your existing cap inspected) before your fireplace starts chirping!

how to write an introduction for an essay.