Fireplace Safety For The Entire family

We’re officially in February, folks, which means that winter is on its way out! Of course, because we live in Texas, that information doesn’t really help us predict what the weather will be like in the upcoming weeks—it could, realistically, be 78°F tomorrow but drop to 46°F the next day. Yuck.

Our point is that there may be a time in the near future when you decide to use your fireplace, even if it will be the first time you’ve done so this year. But before you light up some kindling or turn on the gas flame, take a moment to consider fireplace safety. Here are some tips for keeping your family, home and belongs safe from damage and harm: 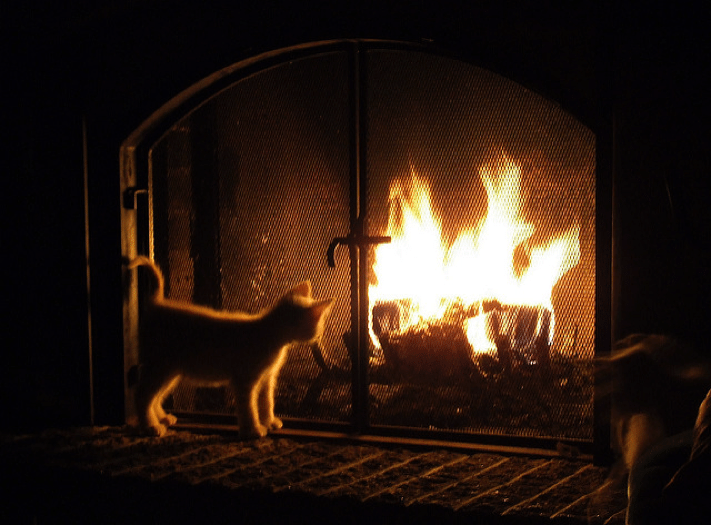 In a recent blog post, we talked about how gas fireplaces are extremely convenient because a fire can be started by simply flipping a switch. However, we also said that this level of user-friendliness can actually be a bad thing, as it may encourage children to play with turning the fire on and off. Whether you have a gas or wood-burning fireplace, it is critical that everyone in your home understands that fireplaces can be extremely dangerous if they’re not used properly. Building or “turning on” a fire should only be done by an adult, and an actively burning fire must never be left unattended. People and pets should always sit a safe distance from the hearth; wood-burning fires can spit out hot cinders or sparks with little warning, and the glass doors that often cover gas-powered fireplaces can become dangerously hot. Keep fingers, faces, clothes, paws and tails away from these hazards!

Have the chimney and fireplace inspected at least once a year.

When was the last time a professional chimney sweep took a good, long look at your chimney and fireplace? If it has been more than a year, then it’s time to schedule an appointment. A trained technician will be able to identify any problems before they become serious issues: damage to the chimney’s brickwork, cracks in the chimney’s liner, creote buildup, physical debris in the fireplace or damper, etc. If you don’t have a chimney cap in place, the inspector will probably recommend that you have one installed, as caps are extremely useful for keeping water, debris and animals out of the chimney (and, by extension, your home).

Ideally, you’ll want to have the chimney and fireplace inspected before you plan to use them on a regular basis. If you’ve already begun to warm your house with fires, though, still go ahead and have the inspection done ASAP—don’t put it off until springtime.

One thing to always be mindful of is bad smells coming from your fireplace or chimney. More often than not, a pungent odor is a sign that something is wrong, so you should not use the fireplace until a professional has diagnosed (and resolved) the problem. For example, a stench of rot or decay could indicate that an animal has died in the chimney and its body is stuck somewhere in the structure. A dank or musty smell could indicate that water has gotten into the chimney; this can rust the damper (causing it to malfunction) and contribute to creote buildup.

And, of course, if you have a gas fireplace and smell gas even when the fireplace isn’t in use, evacuate your home and call your energy provider immediately—there could be a dangerous leak somewhere in the gas line, and this can cause a dangerous explosion if it’s not handled quickly.

…but it shouldn’t be your only line of defense.

If you’re going to have a fire anywhere in your home, then a fire extinguisher should never be too far away. Everyone in the house who is capable of using the fire extinguisher needs to know how and when to do so. If there are children in the house, please explain to them that a fire extinguisher is not a toy and should only be used in a real emergency! This conversation would also be a good time to review concepts like dialing 911 and your family’s personal home evacuation plan.

Now, let’s talk smoke detectors. It’s more than likely that when you moved into your home, you didn’t have to provide your own smoke detectors. These days, most houses and buildings are built with smoke detectors already integrated into their design; the fact that these devices are necessary and can save lives is fairly well-understood by the general public.

If you want to be sure that your detectors stay in “fighting shape,” then test them monthly and replace their batteries annually. Smoke detectors that are more than 10 years old should be replaced completely, as their circuitry may weaken and/or fail with age.

Carbon monoxide is another substance to watch out for; this gas is odorless, colorless, and poisonous. If your wood-burning fireplace and chimney are not ventilated properly, then carbon monoxide can build up inside your home, and inhaling too much of the stuff is actually lethal for both humans and animals. In order to prevent a disaster from occurring, place a carbon monoxide detector (available for purchase at most superstores and home-improvement stores) near your fireplace. Like smoke detectors, carbon monoxide monitors should be tested monthly and have their batteries replaced annually.

A fireplace can be a fun, cozy way to heat your home, create ambiance, and even stave off the “winter blues” that plague so many people this time of year. If you genuinely enjoy the sight, sound, and smell of a cheerfully burning fire in your living room or kitchen hearth, then you’re definitely not alone. But never forget that when you have an open flame indoors, there will always be some risk of danger—or tragedy.

Treating your fireplace and chimney with care and respect may not eliminate this risk completely, but precautionary measures can certainly help minimize it. The bottom line: being genuinely afraid of using your fireplace is probably unnecessary. Being wary of using the fire place, on the other hand, is probably very wise!