Chimneys and Fireplaces in Fairy Tales

With October in full swing, Halloween will soon be upon us! This is the time of year when many people are in the mood to hear spooky stories, and if we’re being honest, chimneys can be a bit scary sometimes. But instead of discussing horror fiction, we’re going to head in a slightly different direction. Let’s talk about fairy tales: those fanciful, fun, and occasionally violent fables that have been entertaining—and disturbing—folks around the world since time immemorial.

We’ll start with what is probably the most famous fairy tale involving fireplaces. “Cinder” is an old-fashioned word for ash, and the main character of this story spends most of her time covered in ash due to a life of keeping house for her wicked stepmother and spoiled stepsisters. Cleaning chimneys is extremely messy work, and it was even more messy back in the days when the fireplace was a home’s primary source of heat and light. It’s no surprise, then, that this chore would affect a girl’s appearance enough to earn her a cruel nickname from her sisters. 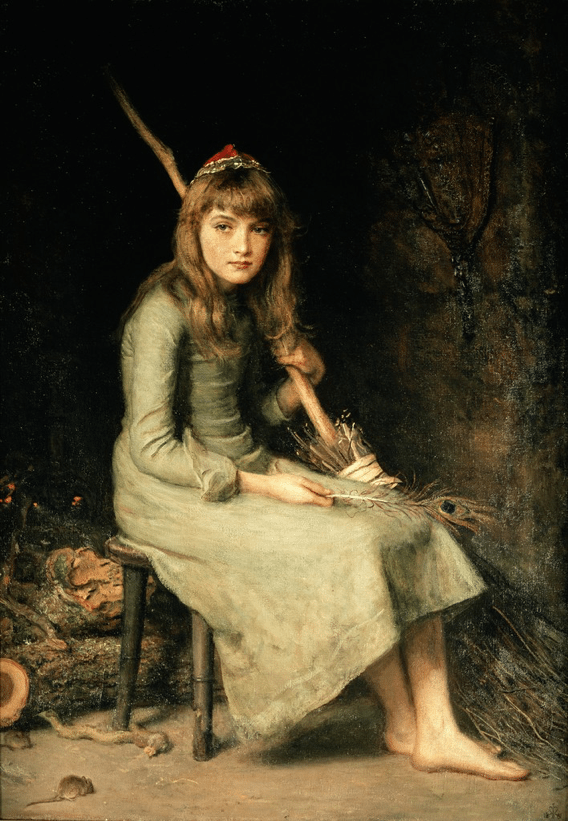 Interestingly enough, the fireplace sometimes plays an even more prominent role in the story: Certain versions of the tale (notably, the one relayed by Jacob and Wilhelm Grimm) depict the wicked stepmother responding to Cinderella’s pleas for permission to go the ball by dumping a large bowl of lentils into the fireplace. Stepmother then tells Cinderella that if she can pick out all of the lentils from the cinders within two hours, she may go to the ball. There’s no real significance to the lentils themselves; the whole thing is designed to be an impossible challenge that will justify forcing Cinderella to stay home. Sure enough, when Cinderella summons her enchanted bird friends and they complete the task for her with plenty of time to spare, Stepmother refuses to uphold her end of their bargain.

The story of Cinderella nearly always ends with her being whisked away from her horrible family to go marry a prince and live “happily ever after.” And that’s very fortunate for her, as inhaling large amounts of ash, soot, and creosote fragments can lead to severe health problems later in life. Chimney “grime” is so toxic that modern-day chimney sweeps wear special equipment—including respirators and gloves—to avoid coming in contact with it. Since Cinderella was apparently exposed to the stuff on a pretty regular basis, we can only hope that her new life as a princess included regular checkups with the royal physician!

Depending on who’s telling the story, The Three Little Pigs can vary in the amount of carnage it depicts. Certain texts, for example, state that the Big Bad Wolf actually eats the first two pigs after successfully blowing down their houses, while other authors insist that these pigs escape from the wolf and find safety at their brother’s brick house. And though the story usually goes that the Big Bad Wolf eventually tries to enter the brick house through its chimney, what happens afterward varies, too: sometimes, he simply burns his bottom on the fire in the hearth and runs away (presumably forever), and sometimes, he lands in a cauldron of boiling water and is subsequently turned into wolf stew. Yikes.

Truth be told, trying to enter a building through its chimney is incredibly dangerous. It’s very easy to get hopelessly stuck within the chimney walls, choke on soot, or simply slip and fall off the roof of the structure. And if the chimney is currently in use, this particular “entry point” may also be compromised by smoke, extreme heat, and fire. The Big Bad Wolf never had much of a chance, here…

This fairy tale, written by Hans Christian Andersen in 1838, might be a bit more obscure than the previous two. It’s the story of a one-legged toy soldier made out of tin who falls in love with a paper ballerina. After taking a tumble out the playroom window, a sequence of increasingly odd circumstances befall him, but by sheer coincidence, he winds up back in the home of his original owner. And just as he’s reunited with his lady-love…one of the children in the house arbitrarily throws him into a roaring fireplace, where he melts down into a lump of tin in the shape of a heart. Wind from an open window blows the ballerina into the flames with him, but being made of paper, all that remains of her once the fire dies out is the sequin that decorated her dress.

It’s probably not the kind of story you want to read to a young child right before they go to bed.

If you’ve read the original text of The Little Mermaid, you’ll know that Anderson had a knack for bittersweet endings. So, what do we make of this particular story? “Life can be random and fate can be cruel” is one takeaway. Other people may see it as a statement about love not always being able to overcome any obstacle. For our purposes, though, we can say that the lesson here is: “Kids, please don’t throw your toys into the fireplace; it’s a cruel thing to do, and the toy in question won’t survive the trip.” Burning foreign objects in a fireplace is frequently a bad idea, after all, and many children will more readily believe that their toys have feelings and aspirations than they will understand that not all flammable things should be burned!

Fairy tales, regardless of their country of origin, tend to contain various character archetypes and recurring plot elements. Chimneys and fireplaces aren’t quite as ubiquitous as wicked stepmothers, enchanted objects, or important things happening in threes, but they do tend to pop up surprisingly often—usually in a destructive capacity. If fairy tales are meant to impart some kind of wisdom or moral to their audience, then perhaps we can view the inclusion of these structures as a warning against the potential dangers that they can pose when misused.

The bottom line: most people love to get scared on Halloween. A house fire originating from a damaged or poorly maintained chimney, though, is scary in the worst way possible!