Is it Safe to Mount your TV Above the Fireplace?

At Chimney and Wildlife Specialists, we’re not really experts on home decor. We’re always happy to help our clients pick out gas logs that will look beautiful in their fireplace or repair structural damage done by pest animals, of course. But quandaries about furniture arrangements or wall ornamentation usually fall outside of our range of expertise.

Still, there’s one interior design question that our clients often ask us:

“Is it safe to mount my flat screen TV on the wall above my fireplace?”

In many cases, folks have seen photos of this living room layout in magazines and loved how it looked, but they were concerned about whether or not the heat and smoke from the fireplace could damage their TV over time. 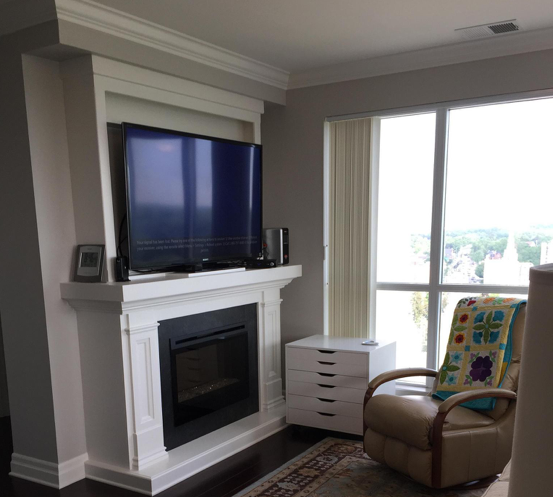 Here are our thoughts on the matter:

Most electronic devices come with some kind of guarantee, and more and more suppliers now offer an optional “extended” warranty when you purchase the device. More often than not, these agreements simply mean that the manufacturer or vendor will repair or replace the device if it stops working within an unreasonably short amount of time. Some warranties are extensive and cover all kinds of situations, while others simply cover manufacturing defects. It goes without saying that you should always, always read a contract/agreement in its entirety before signing it, but doing so is especially important when you’re making a major purchase.

The reason we bring all this up is because it’s not uncommon for HD televisions to have, as part of their guarantee, a clause stating that hanging the TV above the fireplace voids its warranty. Whether or not heat from a fireplace is actually capable of damaging the device is irrelevant—the manufacturer/vendor has decided that they don’t want you to take the risk, and if you choose to ignore their advice, then they’re not responsible for what happens next.

So, regardless of everything else we say in today’s post, it’s probably not a good idea to put your TV over the hearth if doing so will get you in trouble with the manufacturer. While it’s very likely that you won’t have any problems (we’ll explain why in a moment), if you do experience issues, you’ll be up a creek.

Here’s the good news: if everything is functioning the way it should, then heat from your fireplace probably won’t damage your TV. The reason is because most fireplaces are designed to radiate heat outward into the room instead of directly upward toward the ceiling. Mantles and alcoves built into the structure of the hearth typically help facilitate this phenomenon. There’s also little risk of smoke damage to the device, as most gasses will simply travel out of the chimney instead of “washing” over the TV. You’ll probably still need to dust the television regularly and occasionally check for blocked vents, but that’s a routine chore that most people do as part of their housekeeping regimen, anyway.

Pair all that with the fact that televisions tend to be a little more durable than folks assume they are. Most units are actually just fine functioning in ambient temperatures of up to 95°F, and some models can handle even more heat without suffering any ill effects. Chances are, unless the television is practically hanging inside the firebox, the TV won’t really be subjected to such extreme conditions.

In the previous paragraph, we said that the fireplace probably won’t damage the TV “if everything is functioning the way it should.” Unfortunately, we’ve been in the chimney repair industry long enough to know that things don’t always function properly, whether it’s due to neglect over time or extenuating circumstances (like physical damage from a fire or natural disaster).

For example, if your chimney is improperly lined, it’s possible for heat to seep through the brickwork and scorch stuff mounted on the wall. Botched installations (e.g., screws accidentally being drilled directly into the metal flue pipe) can create structural issues or exacerbate existing ones. And a chimney that’s not venting correctly can belch smoke and other gasses into the room instead of up-and-out, which is destructive, annoying, and potentially quite dangerous.

Our best advice is to have your chimney inspected before you think about putting a TV above your fireplace. If a licensed, professional technician gives the structure (and all of its internal mechanisms) a clean bill of health, you should be good to go. If they express concerns, though, you should hold off on any (and all) decorating plans until the problem is fixed.

It would seem that “Can you safely hang your TV above the fireplace?” and “Should you hang your TV above the fireplace?” are two very different questions. Generally speaking, people who have this kind of arrangement in their home pull it off without having any issues. However, it’s very important to know the kind of problems that it may lead to before you decide to make hanging up a new TV your project for the weekend.

Again, we’re not experts in interior design, so we’re probably not the best ones to ask about the “prettiest” place to hang your television. But if you’d like to protect your walls and expensive electronics from misbehaving chimneys and fireplaces, we’ve definitely got you covered!