Six Bats Over Texas – An Overview of Texas Bat Species

When you work in the wildlife removal industry, you tend to run into bats with fair frequency. These winged critters—who, contrary to popular belief, are not rodents—are pretty small, but they can startle the absolute daylights out of someone who’s not expecting to see a bat flying around in their house. And even if you find one while it’s hibernating, the experience can still be unnerving, as bats have a pretty well-earned reputation for carrying rabies.

But bats aren’t all bad; they’re great at keeping insect populations under control, and from a zoological perspective, they’re pretty fascinating creatures.

One of the best ways to fight fear is with knowledge, so today’s post is going to shine a spotlight on six (of the thirty-three) different bat species that you may run across while living in the Lone Star State. We’ll try to cover some of the other varieties in a later post! 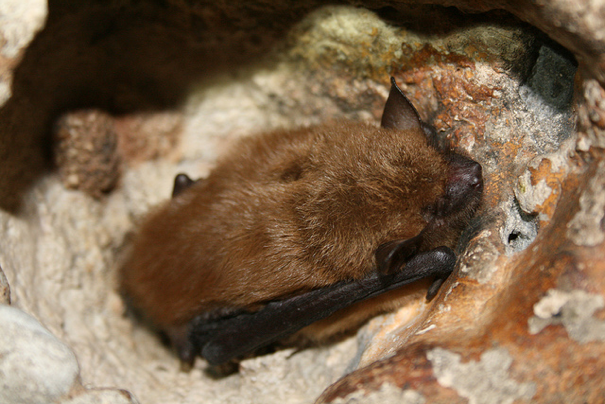 Don’t let the name scare you; while big brown bats (BBBs) are “big” compared to other microbat species, they’re still relatively small animals—only four to five inches in length from nose to tail, with a wingspan between 13 and 15 inches. Their fur ranges in color from chestnut brown to deep russet, and their (hairless) snouts, ears, and wing membranes are black. They’re strict insect-eaters, but they will bite hard enough to draw blood when frightened or cornered. BBBs can be found all over the United States, Mexico, Latin America, and even southern Canada. Pregnant/nursing females usually live in colonies with their young, while adult males and childless females are solitary creatures. 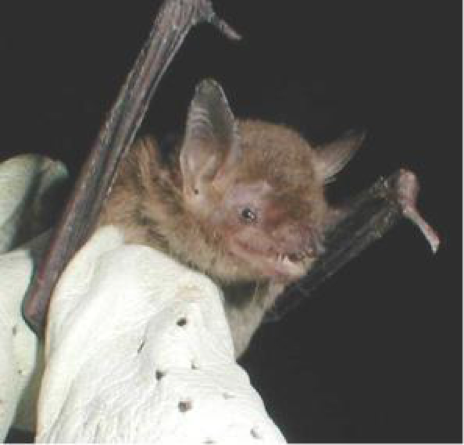 Cave myotis bats (CMs) have a few distinguishing characteristics. First of all, their ears are little and pointed, somewhat resembling the ears of a Chihuahua dog. They have small, somewhat beady-looking eyes, and their fur ranges in color from brown to black, with a lighter patch underneath. They also have bare, hairless “spot” between their shoulder blades. However, their most prominent feature is probably their fluttery, somewhat erratic-looking flight patterns. They’re certainly not “bad” at flying (and in fact have a knack for long-distance flights); they just have a somewhat unusual way of going about it! CMs typically avoid human interaction; once their roosting area is disturbed, they’re far more likely to abandon the spot than stand their ground. 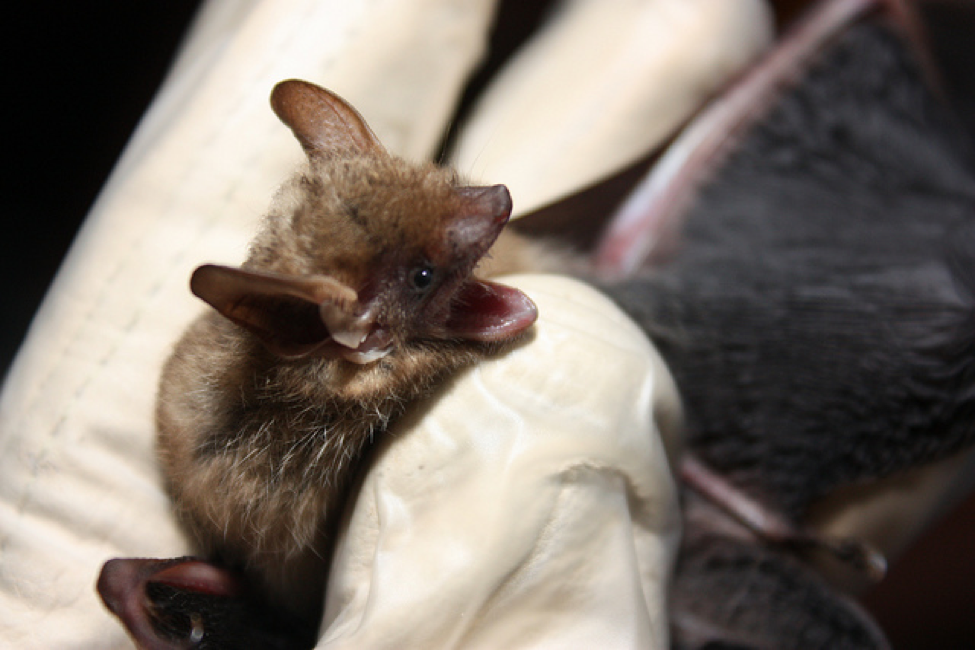 These bats get their nickname from their unique coloration: at a distance, their coats appear to be golden brown or deep orange. However, individual hairs are actually dark at the base, yellow-brown in the middle, and then dark again at the very tips. While their faces, ears, and wing membranes are dark gray or black, their forearms are reddish orange. That brightly-colored forearm makes them easy to identify even during hibernation…which is convenient because Tri-Colored Bats (TCs) do a lot of hibernating. When compared to other bat species, TCs begin hibernation early and finish it late; the end result is a creature that spends six to nine months of every year in “energy-saving mode!” 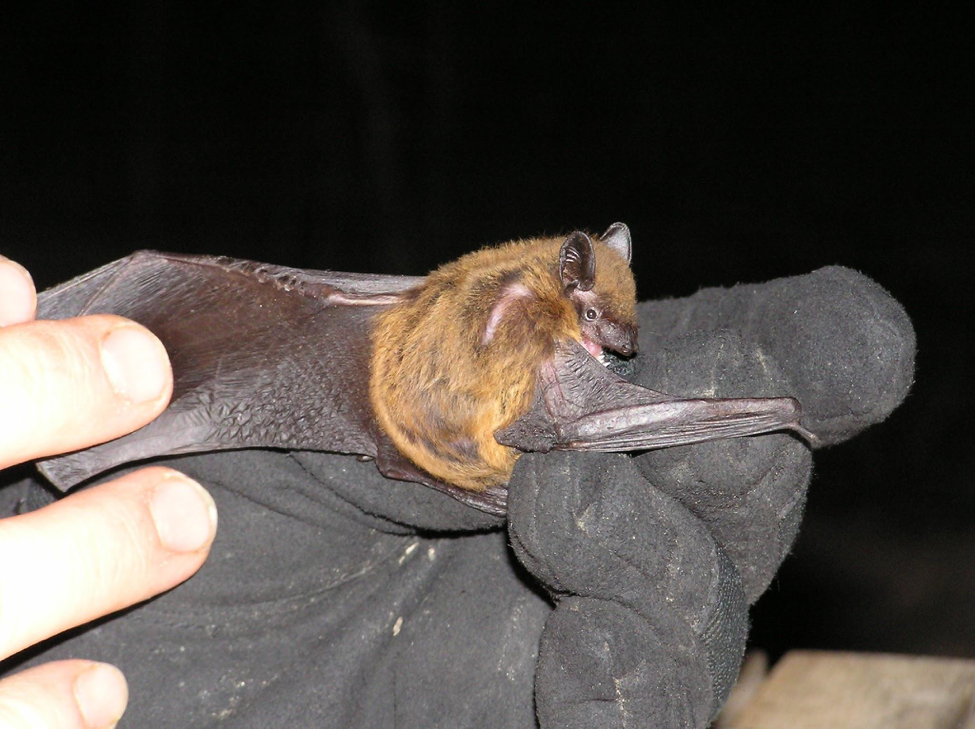 Evening bats are frequently mistaken for BBBs due to their strikingly similar appearance—both have glossy brown coats with black on their faces, ears, and wings. They also both form maternal colonies and like to hang out in caves or trees. There are a couple distinct differences, though. The most obvious one is their size; evening bats are noticeably smaller than BBBs. Also, if you get close enough to these critters to look hard at their ears (which you really shouldn’t do unless you’re a trained professional!), you’ll see that their tragi are short, rounded, and slightly curved instead of pointed. 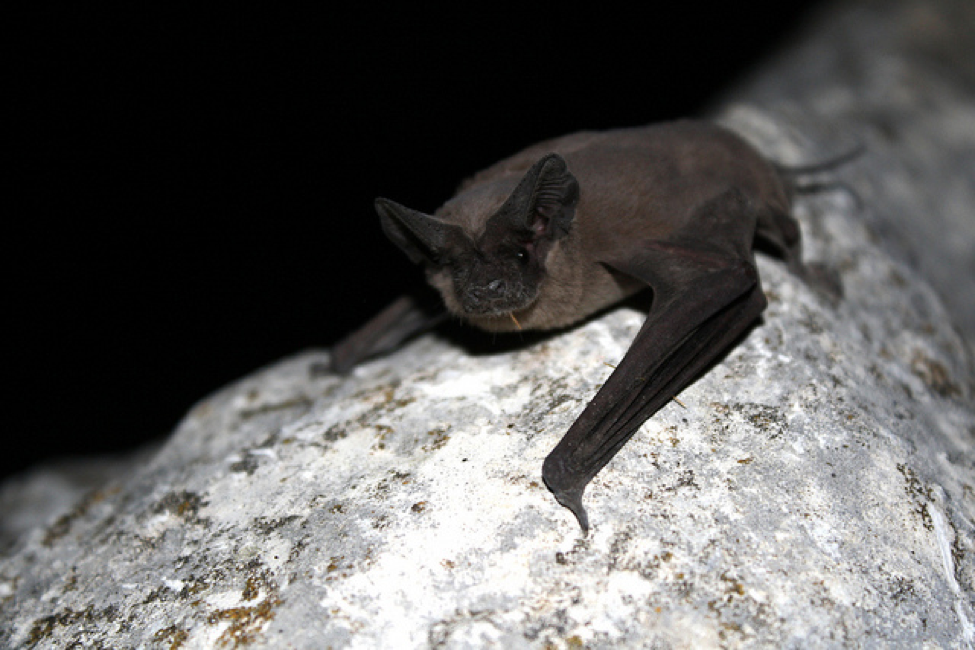 Nearly all bats have tails, but these appendages vary in length and structure between species. Mexican Free-Tailed Bats (MFTs) are one variety whose tails extend beyond their tail membrane; this extra length is believed to help them feel where they’re going as they back-up into nooks and crevices. MFTs have comparatively large ears that appear almost “pinched” together at the base, as well as deep, vertical grooves in their upper lip. Their coats range in color from gray to dark brown. These bats are extremely common in North America, so much so that they’re what many folks think of when they hear the word “bat.” MFTs are fast-fliers and experts at echolocation. In 2014, scientists discovered that, not only do these bats use ultrasonic calls to help locate their prey, but they can also use this same ability to jam each other’s calls, potentially allowing one bat confuse a rival and steal its catch! 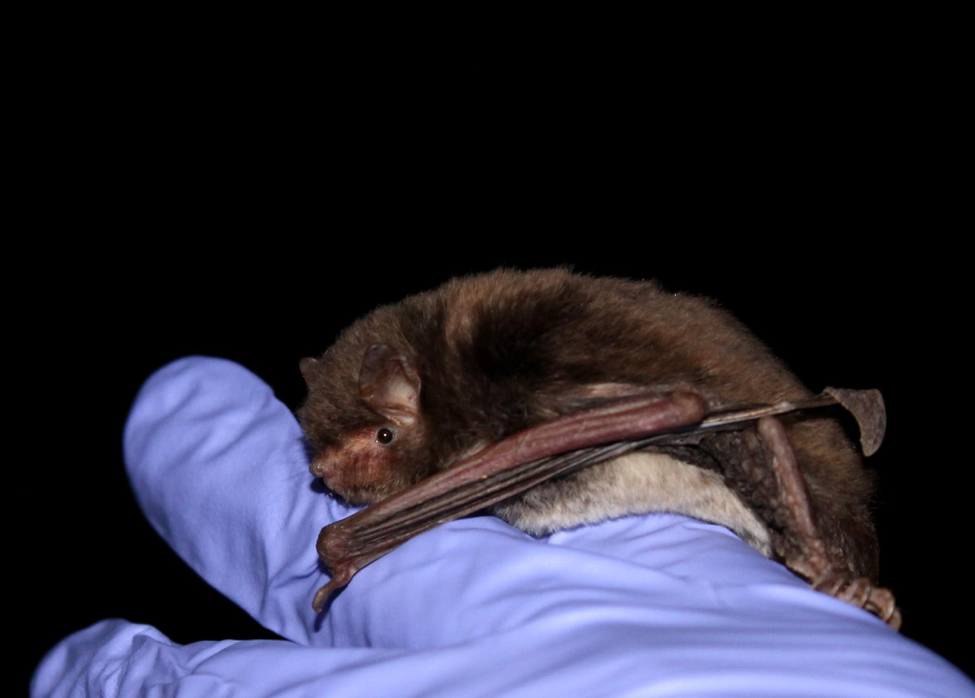 If you’re looking for a critter with a “fabulous” coat, then the southeastern myotis (SM) is your kind of bat! SMs have dense, wooly fur that gives them a somewhat fluffy appearance. They also have light-colored underbellies that stand out sharply when compared to the rest of their dark brown (or deep orange) hair. SMs usually roost in caves and are only found in a small area of northeastern Texas; they’re much more common in Louisiana and Mississippi. Interestingly enough, although most female myotis bats give birth to a single pup at a time, SM pregnancies usually produce twins.

Now, let’s be clear: we are not suggesting that you should try to catch or identify any bats that you find in your home or on your property! Because of the risk of disease transmission, bat-wrangling is a job best left to the experts!

What we are suggesting, though, is that instead of being afraid of bats, people should have a have a healthy respect for them. Just as you can enjoy watching a tiger or a bear in a zoo enclosure while knowing that climbing inside said enclosure to get a “closer look” would be a terrible idea, it’s possible to be interested in bats while still maintaining your distance. Bats really do deserve praise for the role they play in the environment, and learning about the distinctive characteristics of each species can be fun. But there are no varieties of bats in Texas—or anywhere, for that matter—who belong inside your attic!

term paper writers.
Tony, owner and operator of Chimney and Wildlife Specialists, has a big heart for rescuing wildlife and returning animals back to their natural habitat. When Tony is not climbing up a roof, he loves spending time with his beautiful family and their two dogs.