How superstitious are you? Do you go out of your way to avoid walking under ladders? Do you take care to never open an umbrella indoors? Do you avoid potentially dangerous activities on Friday the 13th?

Nearly every object you could encounter in your daily life has some superstition or old wives’ tale associated with it. Chimneys and fireplaces are no different; in fact, their prevalence in human homes has sparked a surprising number of legends surrounding their use. Here are a few common ones:

Some pets really, really love the warmth, sounds, and smells associated with a hearth, so much so that they’ll park themselves right in front of the fireplace as soon as it’s lit. As long as your fireplace includes a screen or other kind of cover, and you keep an eye on your pet to make sure that they aren’t getting too close, there’s nothing wrong with letting Rover and Mittens enjoy themselves. As for the origins of this myth…perhaps a bunch of people saw their cats doing normal cat things (e.g., grooming and lounging) in front of the fire, noticed a difference in the environment, and decided that the two events were connected somehow. It’s the old “correlation does not equal causation” fallacy.

“If you encounter a chimney sweep, make a wish; it will come true.” 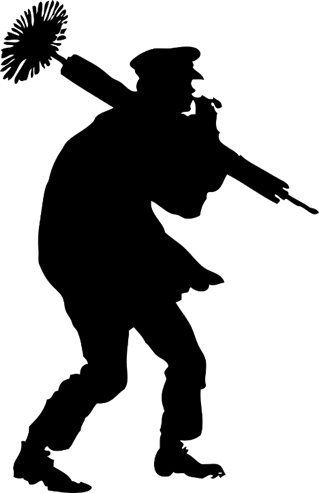 We actually touched on this one in an earlier post. For one reason or another, the sight of a chimney sweep in real life is considered lucky in many European countries, especially on wedding days. Thus, it’s still a common tradition in Great Britain for happy couples to hire chimney sweeps for their wedding. The sweep shows up at the reception, takes pictures with the guests, shakes hands with the groom, “steals” a kiss from the bride, and overall just spreads good cheer (and soot) throughout the party. We don’t think that this custom will catch on in America anytime soon, but it is kinda cute…

“If a wild bird enters your house, you’ll be plagued with bad luck.”

This myth doesn’t specify that the bird has to come in through the chimney; it could technically come in through a door or window, too. However, birds have a knack for infiltrating and nesting in chimneys. That’s why we strongly recommend that anyone who doesn’t currently have a cap on their chimney should have one installed.

“If the smoke from your fireplace is spilling out into the room instead of going up and out, it’s because a witch is sitting on your roof and blocking the chimney. You should go outside and shoo her away.”

A chimney that isn’t venting properly is a major safety hazard. Inhaling smoke can cause respiratory distress, and carbon monoxide gas (a common byproduct of burning wood) is downright deadly. If your chimney is blowing smoke into the room, you probably should go outside for a few minutes just to breathe in some fresh air. Now, in our experience, chimney venting issues are usually caused by some structural or technical problem—not witches. A licensed sweep should be able to whip the chimney back into shape.

“If sparks fly out of the fire, a young lady in the house will soon receive a visit from her sweetheart.”

This one’s easy enough to understand; when two people are attracted to each other, it’s often said that there are “sparks flying” between them. Interestingly enough, folks also sometimes use the same phrase to mean that two people have a heated, passionate argument. That’s fire for you; it can keep you warm at night, and it burns your house to the ground! Anyway, if you (or someone in your family) find that crackling, sparking fires have a certain romantic appeal, try burning softwoods like fir or pine. Just try not to get burned!

Is there any truth to these superstitions? Well, that depends on how you look at them. The one about witches plugging up the chimney is interesting; we have to wonder if people started believing it as a way to explain how carbon monoxide could kill the inhabitants of a house without leaving a mark on their bodies. Having a wild bird in your house isn’t a good idea, though deeming them “bad luck” may be oversimplifying things. And while our technicians would be flattered if you referred to them as “lucky,” we’re much more concerned about being perceived as courteous, friendly, and professional. Luck’s got nothing to do with it!

The bottom line: take these stories with a grain of salt. They’re fun and interesting to discuss, but more than anything else, they’re full of hot air.

http://chimneyandwildlife.com/exploratory-synthesis-essay.
Tony, owner and operator of Chimney and Wildlife Specialists, has a big heart for rescuing wildlife and returning animals back to their natural habitat. When Tony is not climbing up a roof, he loves spending time with his beautiful family and their two dogs.